Sadly, most people never actually see a live skunk except in zoos. If it were not for the frequent road casualties, you would seldom see them at all. It is far more likely that you will smell them. Few people can say they haven’t had that experience.

Of the wild animals one might encounter, the skunk is probably the least aggressive.  Because of its malodorous defense weapon, which it only uses when startled or attacked, it doesn’t have too many natural enemies. This level of confidence causes most to fall prey to cars, owls, coyotes and domestic dogs.

When grown, striped skunks are about the size of a house cat. Nature has marked them in bold black and white patterns to warn anything they encounter.

There are two types of skunks commonly found in Santa Barbara County. The more common of the two is the striped skunk. The other is its smaller cousin, the spotted skunk, which has the amusing defense posture of standing on its hands as a warning.

Skunks are nocturnal animals that become active around dusk and forage until dawn. It is during this food gathering exercise that skunks do most of the damage to property.  Skunks are omnivorous, eating anything from insects, small

rodents, to various types of fruit and vegetables. While searching for food in the soil, they are known to disturb gardens and lawns. Also, if you leave food out for your animals, they will readily take advantage of this free meal meant for your pets. Overall, however, skunks are more beneficial than they are destructive.

Skunks are nomadic and seldom stay in one place for long other than during spring when females burrow to raise their young. Skunks get into trouble with their human neighbors during breeding season because of the odor they freely disperse upon each other during the breeding process. Once mating has been successful, the males wander off continuing their nomadic lifestyle while the pregnant females search for den sites that often happen to be under houses, decks, woodpiles or other areas of debris. Other than scratching noises, they are usually well behaved until the youngsters are close to weaning. This is about the only time you will see skunks out during daylight hours. Once they become more experienced, they will be fully nocturnal.

Skunks are able to use their odor glands almost from birth and many do so when roughhousing with each other or when startled by a real or imaginary intruder. They have poor eyesight.

Most nuisance complaints concerning skunks relate to odor problems they have caused.  Many pets have unwittingly triggered  this weapon much to the chagrin of the irate owner who has to deodorize the family pet. If you or your pet is sprayed by a skunk, contrary to common myth, tomato juice is not the best remedy. There are a number of better and less messy choices such as any tearless shampoo, dish soap and water. You can use a mild bleach and water solution on inanimate objects, not your pet. In all cases, be extremely careful not to get any in the animal’s eyes. Clothing can be  run through one regular wash and dry cycle. Just Remember that the  spray has an oily base and detergent will remove it.  There are many good commercial deodorizers on the market as well.

To expect skunks to change their behavior is unrealistic. Trapping and relocating them or eradicating them all is not the answer. There are ways to peacefully co-exist and take advantage of the positive contributions that skunks make to the environment.

Live trapping is not a recommended solution to ridding your  property and yard of skunks. Because they are around in such  numbers, trapping is only a temporary solution and not humane. It won’t be long before another one or more is attracted to your home especially if you haven’t dealt with those issues that attracted them in the first place! For valid reasons, governmental animal related agencies do not recommend relocation as a solution and will often euthanize all trapped skunks if called for problem management. 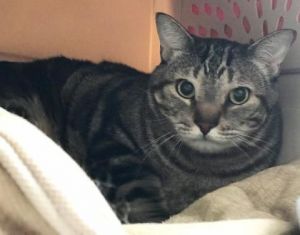 Eli is a bit shy at the moment. He is definitely a sweet boy who likes to be pet. Eli... View full description »