Introducing Your New Cat to Your Other Pets

Introducing Your New Cat to Your Other Pets

It’s important to have realistic expectations when introducing a new pet to a resident pet. Some cats are more social than other cats.

A Word About Kittens and Puppies

Because they’re so much smaller, kittens are in more danger of being injured or killed by a young, energetic dog. A kitten will need to be kept separate from an especially energetic dog until she is fully-grown, and even then she should never be left alone with the dog. Usually, a well-socialized cat will be able to keep a puppy in its place, but some cats don’t have enough confidence to do this. If you have an especially shy cat, you might need to keep her separated from your puppy until he matures enough to have more self-control.

When To Get Help

If introductions don’t go smoothly, seek professional help immediately. Animals can be severely injured in fights, and the longer the problem continues, the harder it can be to resolve. Conflicts between pets in the same family can often be resolved with professional help. Punishment won’t work, though, and could make things worse. 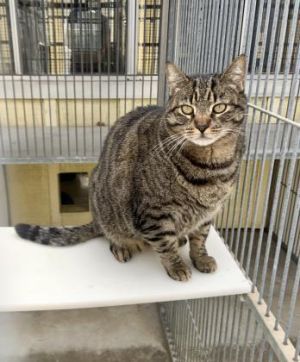 Looking for a mellow kitty to hang out with? Tiger might be the cat for you! Tiger is a sweet... View full description »